As the world rekindles it’s love affair for 80’s nerd culture with likely thanks to the compelling new Netflix Original “Stranger Things” - a love letter to an era of electronic music, Dungeon’s and Dragons and our favourite childhood films and TV shows. I thought it would be a topical opportunity to recommend a novel of a very similar vain; Ready Player One by Ernest Cline. I’m no longer a big reader sadly, with a busy life and other ways to entertain, finding the time to sit down with a good book is often challenging, although this wasn’t always the case! In school I would devour every “Choose Your Own Adventure” or “Fighting Fantasy Book” available to me in the school library. I was the kid with a set of dice and a scruffy piece of paper (I wouldn’t use the back of the book, as it would ruin it.) with stats and life points jotted down to keep pace with the fantasy life I lead during break times.

With a pending holiday, I knew I needed a book to keep me occupied poolside. I could have taken my PS Vita, but screen glare and the possibility of SPF smeared on it's OLED screen would likely prove the mother of all first world problems. After having a browse in the graphic novel and sci-fi section of Waterstones - a novel task in itself that I found surprisingly therapeutic - I settled upon purchasing a copy of Cline's “Ready Player One”

Ready Player One is set in a future where the earth has been ravaged by wars and where extreme poverty exists. The outlet for the population is the “Oasis”, a colossal virtual universe comprising of thousands of worlds made not just by the original programmers but by the very users themselves. A little like Minecraft, users share the same space to create worlds and interact whilst using agile serves that prevent lag or error messages.

The story begins with the death of the architect of the Oasis, James Halliday, a genius who I envision a part-Steve-Jobs-part-Willy-Wonka character. James' love for all things 80’s including; music, film, TV, board and video games sets the story in motion by offering a metaphorical golden ticket: Keys to the Oasis kingdom and all his wealth to whomever can solve the in-game riddles.

This offer results in protagonists being drawn into the world that is full of hidden clues using every trick in the video game book to test players worth to find James’ Easter Egg. Winning not only entitles the successor to James’ fortunes but entitles them ownership of the Oasis and the protector of this MMORPG.

Whilst it’s hard to divulge further without giving too much of the story away, if you were a child growing up in the 80’s and have fond memories of the popular culture that moulded the decade, or enjoyed books written by the legendary Steve Jackson and Ian Livingstone then you will not be disappointed by Ready Player One’s many nod’s to the period. 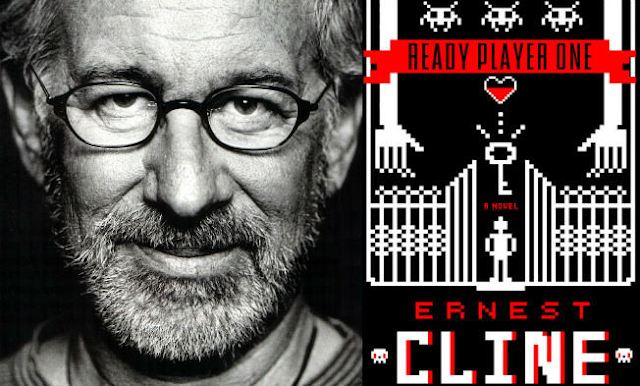 And if you must wait for the film, then that’s currently in production too. With likeable characters, genuine surprises and a world that’s asking to be brought to life on the silver screen, it’s a relief to know this brilliantly engaging piece of sci-fi fiction is in the safe hand of iconic 80’s movie director Mr Steven Spielberg and is due for release in 2018.
Posted by Unknown at 09:32